Winner of the IUPAP Young Scientist Prize in Atomic, Molecular and Optical Physics 2017 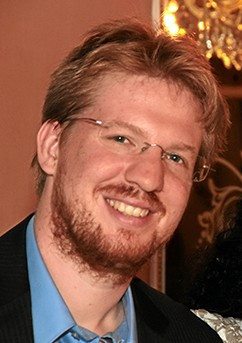 The award of IUPAP Young Scientist Prizes in Atomic, Molecular, and Optical Physics recognizes the recipients outstanding contribution to the areas of physics within the remit of the Commission. The Prize includes a certificate, a medal, a EURO 1,000 award and an invited presentation at ICPEAC.

Dr. Johannes Feist received his Ph.D. from Vienna University of Technology in 2009 and afterwards was awarded the ITAMP postdoctoral fellowship at the Institute for Theoretical Atomic, Molecular and Optical Physics (ITAMP) at the Harvard-Smithsonian Center for Astrophysics and Harvard University. In 2012 Johannes joined to the group of F. J. García Vidal as a senior postdoc at the Department of Theoretical Condensed Matter Physics at the Universidad Autónoma de Madrid, and in 2017, he started a tenure-track position as an IFIMAC Young Researcher at the Condensed Matter Physics Center (IFIMAC) in the same university.

His current research focuses on the influence of strong light-matter coupling on the properties of organic materials. In this regime, the interaction between transitions in emitters and conﬁned light modes becomes strong enough that the elemental excitations of the system become hybridized light-matter states, so-called polaritons. This can lead to changes in material properties and even significantly modify chemical reactions. Johannes has made a number of significant contributions to this rapidly growing field, and in particular developed a theory combining molecular physics with cavity QED that can treat polaritonic chemistry by extending the concept of molecular potential energy surfaces to the strong-coupling regime. Based on this work, he has been able to show that nuclear motion in separate molecules could become correlated through their common interaction to a single light mode, as well as that photochemical reactions can be significantly suppressed or novel reaction channels opened under strong light-matter coupling with organic molecules.