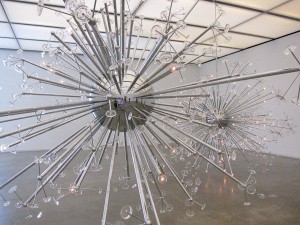 Topological states of matter represent an exotic organizational form of quantum matter that contradicts the traditional paradigms of condensed matter physics. Our understanding of how topological order emerges from the microscopic degrees of freedom of a quantum many-body system is far from complete. Especially intriguing is the possible formation of non-Abelian topological phases, whose excitations display non-Abelian braiding properties with potential application for quantum computing.

In this talk I will propose a physical mechanism for the emergence of non-Abelian topological phases: the quantum merging of identical copies of the same many-body state. I will argue that such a global organization, in which particles are organized into identical indistinguishable groups, can give rise to topological quasiparticles obeying non-Abelian statistics. To illustrate the construction, I will present a physical realization of this type of order in a spin-1 lattice model. In the ground state, spins are organized in two identical quantum loop condensates. Excitations with non-Abelian braiding properties are created by opening loops in each of the copies. My proposal might open a door for the understanding of the origin of topological states of matter and for the experimental realization of non-Abelian anyons in the laboratory. Nano optics is devoted to understanding the electromagnetic field behavior when probed at length scales smaller than the visible wavelength. This is a vast field of research encompassing from foundational issues to technological applications. The propagation of light and its confinement at small volumes are two of the main aspects researched in our group. The modulation of the optical field at the mentioned scales requires the interaction of light with materials structured at micro- and nanometer dimensions. Such structures include quantum dots, graphene ribbons, microcavities, and metallic waveguides, among others. Given the considered sizes, the analysis has to account both for quantum and classical phenomena. At the quantum level we investigate, for instance, how the modification of the electromagnetic environment can profoundly affect the emission properties of molecules and artificial atoms. Such modification can be used to control quantum mechanical degrees of freedom of the emitter system, and allows for the manipulation of its entanglement. On the classical side we can mention, as an example of our work, the use of transformation optics techniques to mold the propagation of surface plasmons. we also study metamaterials, a family of systems where function arises as a consequence of periodic structuring at scale smaller than the operating wavelength. Although many of the considered metamaterial systems typically operate at much slower frequencies than those commented above, they can be approached with the same theoretical and computational tools that we use in nano-optics. Metamaterials can lead to entirely novel electromagnetic phenomena not available in nature and find a large number of applications in plasmonics, photonics, acoustics, and many other wave-like phenomena.