Quantum and Nonlinear Phenomena in Plasmonics

Description:
We study from a theoretical perspective several electromagnetic phenomena that appear in structured metals.
More precisely, we address the following topics: 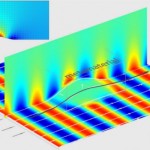