Our work with our colleagues in the University of Michigan (Ann Arbor, USA) and in the University of Konstanz (Germany) has been published today in Nature: “Heat dissipation in atomic-scale junctions”, W. Lee, K. Kim, W. Jeong, L.A. Zotti, F. Pauly, J.C. Cuevas, and P. Reddy, Nature 498, 209 (2013). 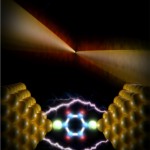 In this collaboration, we have investigated how the Joule heating takes place in atomic and molecular junctions, a fundamental issue for the fields of molecular electronics and quantum transport. In particular, our colleague Pramod Reddy and his coworkers fabricated novel scanning tunneling probes with integrated nanothermocouples. This ingenious probes allowed them to fabricate single-atom and single-molecule junctions, in the spirit of break-junction techniques, and at the same time to measure the temperature rise in the probe electrode due to the passage of an electrical current through the junctions. Moreover, with the help of the Landauer theory of quantum transport and ab initio calculations, we understood that the heat dissipation in the electrodes of a nanoscale device depends on its transmission characteristics and, in general, this dissipation is asymmetric –that is, unequal between the electrodes– and also dependent on both the bias polarity and the identity of the majority charge carriers (electrons versus holes). We believe that our work paves the way for the study of the Peltier effect –the electrical cooling of a conductor— at the atomic scale and it is also the first step towards the study of thermal transport through atomic and molecular junctions, which is presently one of the main challenges in nanoscience. 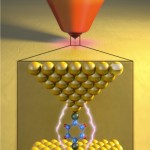