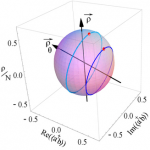 The normalized Bloch sphere (Paria sphere) describes clearly and elegantly the Rabi and Josephson oscillations. Pure Rabi oscillations are circles normal to the polariton axis ρθ. Whether they encircle (light blue) or not (dark blue) the axis of observables ρ (photon-exciton) makes their relative phase oscillating (as expected) or drifting (usually attributed to Josephson dynamics).

Polaritons arise from the strong-coupling between light and matter (1). As a particle, a polariton is a quantum superposition of a photon and a quantum of material excitation (let us call the latter an “exciton”, it could be an atomic transition, a plasmon or indeed a semiconductor exciton). As compared to a molecule where both components are present simultaneously to bind together, the polariton constituents are only partially present, being either constantly created and annihilated (the photon becoming the exciton and vice-versa) or in a steady state but with non-unit probability of being there.  This is described by an entangled state of the form:

where α and  β are the amplitudes of probability for the corresponding one-particle states (one photon, 0 exciton and vice-versa). In experiments, however, such genuinely-quantum states are difficult to achieve, and one deals with classical version where the entanglement has vanished. For instance, a coherent superposition of polaritons, that follows a pulsed laser excitation, leads to a product of coherent states of the form (2):

where α and  β have the same dynamics as before but are now directly the amplitudes of real (classical) fields for coherent states of photons and excitons (3). As such, one can speak of Rabi oscillations of polaritons but in the sense of Leggett (4), not in the sense of Rabi (5). That is to say, polariton Rabi oscillations are the weak-interaction limit of the Josephson dynamics of two coupled condensates. This makes the problem of Josephson oscillation of polaritons more fundamental and central to the polariton physics, and therefore worthy of dedicated attention.

In Scientific Reports (6), we provide the theory for polariton internal Josephson dynamics that generalizes the textbook (atomic) theory for the case of dissipative particles with an arbitrary detuning and possibly different interaction strength. We show how the linear drift of the relative phase is not proper to the Josephson regime and propose an unambiguous criterion to tell apart the Rabi and Josephson regimes based on the stability of the fixed points. The dynamics is greatly simplified on a normalized Bloch sphere (Paria sphere) (7) where the pure Rabi regime corresponds to circles on the sphere, whose relative orientation as compared to the axis of observables account for the possible complex phase dynamics. Complex transitions between the regimes can occur. Several new phenomena are predicted that become in need of their experimental observation. [Full article]