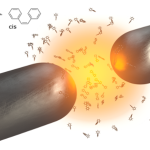 Example of a nanophotonic system where organic molecules are strongly coupled to a plasmon mode (confined light mode) in the gap between two metallic nanoparticles, thus suppressing the photochemical reaction sketched in the inset.

Photoisomerization is a change in chemical structure of a molecule after the absorption of a photon. It plays a crucial role in biological processes, for example in human vision, as well as for technological applications such as solar energy storage, optical memories, or molecular switches. However, photoisomerization can also have detrimental effects, for example as an important damage pathway of DNA, or as a limiting factor for the efficiency of organic solar cells. While photoisomerization can be avoided by shielding the system from light, this is of course not a viable approach for devices that rely on the interaction with external light (such as solar cells).

In a theoretical study published in Nature Communications, a group of researchers from the Departamento de Física Teórica de la Materia Condensada and the Condensed Matter Physics Center (IFIMAC) at the Universidad Autónoma de Madrid show how it is possible to take advantage of the phenomenon of strong light-matter coupling to significantly suppress photoisomerization and similar photochemical reactions.

Strong light-matter coupling is a well-known concept in quantum electrodynamics that has received a lot of attention in recent years. A quantum emitter (for example an organic molecule) and a light mode (a confined photon) become strongly coupled when the molecule can repeatedly emit a photon into the confined mode and reabsorb it before it is lost to the environment. The natural states of the system then become new hybrid states with mixed light-matter properties, known as polaritons. Strong coupling is chiefly achieved by exploiting the tools of nanophotonics and nanoplasmonics, which allow to create and design structures that can confine light to small spaces of only a few nanometers, such as in the gap between two metallic nanoparticles as sketched in the figure.

The researchers show that strong coupling in the molecule-photon system leads to a change in the energy landscape of the reacting molecule, creating an energy barrier that blocks the natural pathway from one isomer to the other. Under irradiation with an external light source (such as sunlight or a laser), the excited light-molecule state (polariton) then is significantly more stable than a molecule by itself.

Going beyond the single-molecule case, the researchers next studied the case of a large group of molecules coupled to a single electromagnetic mode. In this situation, the polariton is formed by distributing the excitation coherently over all of the molecules, enhancing the effective light-matter coupling. This is the most common way of achieving strong coupling experimentally. However, previous studies had found that the collective enhancement does not apply for changes to the internal structure, such that one could expect that the stabilization of the molecules would disappear in this setting. In a surprising twist, the opposite turns out to be the case: The researchers found that the stabilization effect becomes even more pronounced for a large number of molecules. The reason for this lies exactly in the collective nature of the excitation: Because it is distributed over many molecules, each molecule spends most of the time in its chemically stable ground state, which does not undergo isomerization. This leads to an additional collective protection of the polariton when many molecules are involved.

The study thus shows that thanks to their hybrid light-matter nature, polariton modes can be significantly more chemically stable than excitations in bare molecule, and even more so in the common experimental case of collective strong coupling. This new kind of collective protection could pave the way towards novel polaritonic materials for devices such as solar cells. [Full article]