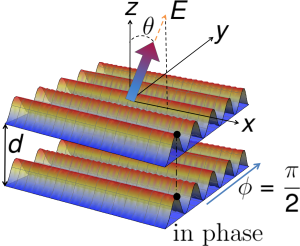 Ultracold atomic gases have thus far provided a veritable playground in which to explore quantum many-body phenomena. Among the field’s great successes, there is the ability to create tightly bound heteronuclear (Feshbach) molecules with a permanent electric dipole moment. In particular, the recent possibility to experimentally realise quantum degenerate dipolar Fermi gases, and confine them in 2D, paves the way for exploring many-body physics with long-ranged (dipole-dipole) interactions in low dimensional systems, with the advantage of having a cleaner and more tuneable analogue of the solid-state electron system. The central interest of this informal seminar will be the formation of density-wave phases, such as stripes, driven by the interplay between dipolar strong correlations and the architecture of the low dimensional system [1,2].