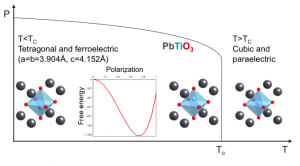 Ferroelectric perovskites are materials of great fundamental and applied interest. This family of materials displays a great range of functionalities, from ferroelectricity to superconductivity. More interestingly, perovskites show a very rich phase diagram allowing for a great tunability playing with doping, epitaxial strain, and the combination of different materials in heterostructures. This has led to the discovery of completely new interface-based phenomena in the last years, for instance a fundamentally new type of ferroelectricity has been discovered in PbTiO3/SrTiO3 superlattices, due to the unexpected coupling of ferroelectric and antiferrodistortive structural distortions in these heterostructures [1].
First in this talk, we will present first-principles calculations, within the density functional theory, on the coupling between epitaxial strain, polarization, P, and oxygen octahedra rotations in monodomain (PbTiO3)n/(SrTiO3)n superlattices [2]. We have studied different periodicities, n ranged from 1 to 3, with an improper ferroelectric behaviour. P is found to be extremely sensitive to strain, and rotates continuosly from a c-phase (P oriented along the [001] direction) for compressive strains, to an aa-phase (P along [110]) under tensile strain. The out-of-plane component of P, Pz, is always preserved at the interface to minimize the electrostatic energy, and decreases in the PbTiO3 layer with respect the bulk value, reflecting the energy cost of polarizing SrTiO3. At the origin of these new phases with an in-plane component of P, we have found the preference of the polarization in PbTiO3 to rotate, over an homogeneous decrease of Pz. Around the lattice constant imposed by a SrTiO3 substrate, the system displays a large piezoelectric reponse. Changes in polarization are strongly coupled with the response of the oxygen octahedra, whose rotations and tiltings cannot be explained by the usual steric arguments alone. Instead a covalent model on the polarization-tilting coupling is developed.
Second, following the suggestion of a recent experimental work [3], who suggested that the ground state of this system might be actually polydomain for most periodicities, we will also report on simulations on PbTiO3/SrTiO3 superlattices including the presence of domains to complement the last experimental results and to better understand the properties of domain structures in these superlattices.
This work was supported by the Spanish Ministery of Science and Innovation through the MICINN Grant FIS2009-12721-C04-02; by the Spanish Ministry of Education through the FPU fellowship AP2006-02958; and by the European Union through the project EC-FP7, Grant No. NMP3-SL-2009-228989 “OxIDes”. The authors thankfully acknowledge the computer resources, technical expertise and assistance provided by the Red Española de Supercomputación.