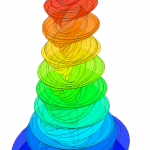 One of the two new kinds of light.

Light is the substratum of the universe since it became transparent in the photon epoch, c. ten seconds after the big bang. As a physical entity, it is the most fundamental and best understood theoretical object, and sets the standard for quantum field theories. It pervades not only humankind’s science and technology, but also its history, culture and civilization [“Let there be Light”, Genesis 1:3]. It has exerted fascination since the dawn of time and was at the heart of many of the major intellectual feasts to bring meaning to our surroundings, in particular shaping both the quantum and relativity theories that are the pinnacle of modern science. The interest for light in all its possible variations is ever increasing.

At the occasion of the International Year of Light and Light-based Technologies (2015)-a UNESCO observance that aims to raise awareness of the achievements of light science and its applications and its importance to humankind-we will give an overview of past and recent scientific achievements, covering such different aspects as astronomy, medicine and communication (classical and quantum), as well as the latest developments that take Light in always more remote corners. In particular, we will present in more details two new kinds of light proposed recently by the speaker and co-authors, one quantum light where the fundamental brick of the light field is upgraded from being an isolated photon to bundles of them [Nature Photonics 8:550 (2014)], and another classical one that takes all the states of polarizations in each emitted pulse [Light: Science & Applications (2015)]. Implications and applications for now and the future will conclude our brief overview of light.