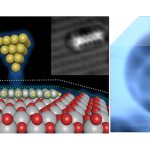 Submolecular imaging using frequency-modulation (FM) atomic force microscopy (AFM) has recently been established as a stunning technique to reveal the chemical structure of unknown molecules, to characterize intra-molecular charge distributions, and to observe chemical transformations. So far, most of these feats were achieved on planar molecules using the so-called qPlus sensor, a specially designed quartz AFM sensor. The KolibriSensor, another type of quartz AFM sensor, is also expected to be capable of high-resolution imaging, but only very few experimental results have been reported to date.

Here, we present submolecular resolution images and spectroscopic data on single molecules of a porphycene derivative [1] using small oscillation amplitudes with KolibriSensors. Force volume measurements with CO-functionalized probes [2] revealed features that may be related to the isomers of porphycene molecules. We also report a novel imaging method to achieve submolecular resolution on three-dimensional molecules and structures using a silicon (Si) cantilever-based AFM operated with large oscillation amplitudes. At variance with previous implementations, this method allowed us to simultaneously image both intra-molecular structures and the atomic arrangement of the substrate [3]. Force volume measurements over C60 molecules clarified the validity of our method to achieve submolecular resolution [3].