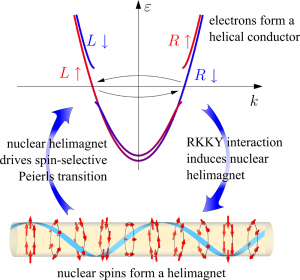 Spin-orbit interaction in condensed matter systems has attracted much attention very recently. It underlies the general goal of controlling and detecting spins by electric fields, and is an essential ingredient for the currently very popular topological insulators and Majorana bound states.

In this talk I will show that the spin-orbit interaction in carbon nanotubes has distinct features that allow to obtain information on the entanglement of injected pairs of electrons. I will give an introduction to the spin-orbit interaction in single-wall nanotubes and then discuss the cases of a nanotube cross-junction and a double-dot Cooper pair splitter setup. For the cross-junction I will show that spin-orbit interaction causes an entanglement-depending noise spectrum with a richer spin structure than in previously discussed setups. For the double-dot system I will demonstrate that tunable spin-orbit induced spin-filtering allows to implement entanglement detectors, such as violations of a Bell inequality or quantum state tomography, by conductance measurements alone.