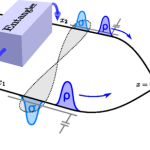 In this work we demonstrate that simple dc current measurements can reveal the presence of electronic entanglement between two interacting nanowires. The effect is based on spin-charge separation, a non-Fermi liquid property characteristic of interacting one-dimensional systems.

We investigate tunneling between two spinful Tomonaga-Luttinger liquids (TLLs) realized, e.g., as two crossed nanowires or quantum Hall edge states. When injecting into each TLL one electron of opposite spin, the dc current measured after the crossing differs for singlet, triplet, or product states. This is a striking new non-Fermi liquid feature because the (mean) current in a noninteracting beam splitter is insensitive to spin entanglement. It can be understood in terms of collective excitations subject to spin-charge separation. This behavior may offer an easier alternative to traditional entanglement detection schemes based on current noise, which we show to be suppressed by the interactions.