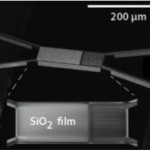 Thermal radiation plays a major role in energy conversion, thermal management, and data storage. In recent years, several experiments on thermal radiation between bulk materials have demonstrated that radiative heat transfer can be greatly enhanced in nanoscale gaps. However, it was not clear whether such enhancements could be obtained with nanoscale films thinner than the penetration depth of radiation. In this work, our colleagues of the University of Michigan (the groups of Pramod Reddy and Edgar Meyhofer) have conducted near-field radiation experiments using a novel ultrasensitive calorimeter that demonstrate enhancements of several orders of magnitude in radiative heat transfer, even for ultra thin dielectric films (50 nm), at spatial separations comparable to or smaller than the film thickness. Researchers from IFIMAC (V. Fernández-Hurtado, J. Feist, F. J. García-Vidal and J. C. Cuevas) have explained these striking results making use of the theory of fluctuational electrodynamics. In particular, we have showed that the near field radiative heat transfer in polar dielectric thin films is determined by the excitation of cavity surface phonon polaritons. These surface electromagnetic modes have characteristic penetration depths that are of the order of the gap separating the receiver from the emitter. In practice, this implies that the entire near field thermal radiation emitted by a polar material comes from its surface. Thus, the thermal emission of a polar thin film is independent of its thickness, as long as the gap between materials remains smaller than the film thickness. Our findings have important implications to a variety of future energy conversion and heat transfer nanotechnologies.