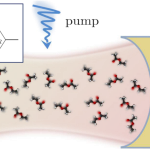 Figure: Sketch of the system. The blue arrow depicts the pump beam, while the green and red arrows show the two emitted laser beams. The inset shows the energy structure, with the vibropolaritons (purple) separated by the Rabi splitting.

Raman scattering is a nonlinear optical process in which a photon is converted into two new excitations: a photon of a different color, as well as a material excitation such as a phonon (a quantum of vibrational energy). In a Raman laser, stimulated Raman scattering is exploited to create sources of coherent light with a wide range of achievable output wavelengths. This concept can be implemented in a variety of configurations, such as under pulsed or continuous operation, and using a wide range of nonlinear media such as optical fibers, nonlinear crystals, gases, or semiconductor materials. However, all these devices share the same drawback: Only the photon resulting from Raman scattering is used, while the material excitation is “lost” and its energy deposited in the form of heat.

In a theoretical study published in Physical Review Letters, a group of researchers from the Departamento de Física Teórica de la Materia Condensada and the Condensed Matter Physics Center (IFIMAC) at the Universidad Autónoma de Madrid present a proposal to circumvent this drawback of conventional Raman lasers. The crucial step is to modify the vibrational excitations in the material, converting them into hybrid light-matter excitations that have a photonic component, so-called vibropolaritons. This can be achieved through so-called “strong coupling”, which occurs when the coupling between the vibrational excitations and a resonant confined light mode becomes faster than the decay of either constituent. The resulting vibropolaritons then decay most efficiently through emission of light, which has two important consequences in the context of Raman lasers: First, the heat deposition is strongly reduced, as this energy is now emitted as photons. Second, and even more importantly, the Raman laser with only a single output beam is converted into a different type of nonlinear optical device, a so-called optical parametric oscillator with two output beams. These beams are coherent and have a stable phase relation, as well as providing possibly entangled pairs of photons with non-classical correlations.

In addition, the authors show that the coexistence of two vibropolariton modes with similar properties allows to operate the same device as an all-optical switch. Here, one (gate) pump beam can be used to switch on or off the Raman lasing of a second (signal) pump beam with slightly detuned frequency. In this mode of operation, both vibropolariton modes show stimulated emission as soon as the total pump power becomes large enough, such that the device produces three coherent output beams.

These results are an example of the great potential that hybrid light-matter states possess in manipulating light fields and providing novel light sources. The proposed setup could be used in novel solid-state microcavity devices for applications requiring mutually coherent and/or entangled beams in disparate frequency regions, such as quantum information transmission and storage. In addition, this approach could improve existing Raman lasers by lowering the operating threshold and reducing heat generation. [Full article]