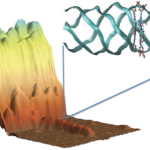 A single G4-DNA molecule has been shown to be able to transport charge over very long distances by Livshits et al. whose findings have been published in Nature Nanotechnology.

DNA and DNA-based polymers are of interest in molecular electronics because of their versatile and programmable structures. However, transport measurements have produced a range of seemingly contradictory results due to differences in the measured molecules and experimental set-ups, and transporting significant current through individual DNA-based molecules remains a considerable challenge. Here, we report reproducible charge transport in guanine-quadruplex (G4) DNA molecules adsorbed on a mica substrate. Currents ranging from tens of picoamperes to more than 100 pA were measured in the G4-DNA over distances ranging from tens of nanometres to more than 100 nm. Our experimental results, combined with theoretical modelling, suggest that transport occurs via a thermally activated long-range hopping between multi-tetrad segments. These results could re-ignite interest in DNA-based wires and devices, and in the use of such systems in the development of programmable circuits.