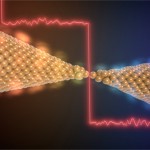 Article: published in Science by Juan Carlos Cuevas, IFIMAC researcher and member of the Department of Theoretical Condensed Matter Physics.

What does determine the heat flow through a single atom? This is the ultimate question in the field of nanoscale energy transport and its answer is crucial to establish the fundamental laws that should describe the thermal transport in a variety of nanoelectronic devices. In the context of electrical circuits, the atomic scale was first reached with the advent of metallic atomic-size contacts and single-molecule junctions in the 1990s. These systems constitute the ultimate limit of miniaturization and have emerged as an ideal playground to investigate quantum effects related to charge and energy transport. Thus for instance, in recent years it has been shown that transport properties of metallic atomic-size contacts such as the electrical conductance, shot noise, thermopower, or Joule heating are completely dominated by quantum effects, even at room temperature. However, the experimental study of thermal conduction in these atomic-scale systems continues to be a formidable challenge and it has remained elusive to date in spite of its fundamental interest.

This basic open problem has now been resolved in a work published in Science by a collaboration between the groups of Pramod Reddy and Edgar Meyhofer (University of Michigan), Fabian Pauly and Peter Nielaba (University of Konstanz), and the IFIMAC researcher Juan Carlos Cuevas. In this work, the authors made use of custom-designed picowatt-resolution calorimetric scanning probes to measure simultaneously the electrical and thermal conductance of gold and platinum atomic contacts all the way down to the single-atom level. This study reveals that the thermal conductance of gold single-atom junctions is quantized at room temperature in units of the universal thermal conductance quantum. It also shows that the Wiedemann-Franz law relating thermal and electrical conductance is satisfied even in single-atom contacts, irrespective of the metal. Furthermore, this work shows that all these observations can be quantitatively explained within the Landauer picture for quantum coherent thermal transport. In particular, this theory clarifies that the observations described above are due to the fact that electrons dominate the thermal conductance in these metallic nanowires, and in the gold case electrons proceed ballistically through the contacts via fully open conduction channels.

The experimental techniques developed in this work will enable systematic studies of thermal transport in atomic chains and molecular junctions, which is key to investigating numerous fundamental issues that have remained inaccessible despite great theoretical interest. [Full article]