Real-space Collapse of a Polariton Condensate 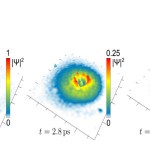 Exciton-Polariton are quasiparticles that arise from the coupling of two bosonic fields. Since they are composed by photons and excitons (both trapped in a semiconductor microcavity),  they combine both properties of light and matter. A decade ago, the first Bose-Einstein condensate (BEC) of polariton was demonstrated,  leading to many experiments on long-range coherence, superfluidity, quantized voticity etc.

In a recent work published in Nature Communications by a collaboration between the groups of Daniele Sanvitto (Lecce, Italy), Alexei Kavokin (Southampton, England) and Fabrice Laussy (Madrid), a unique phenomenology of polariton BEC has been reported. When the polariton vacuum is excited by a light pulse, the quantum fluid suddenly created does not splash but instead coheres into a very bright spot, producing a very sharp, resolution limited, peak. This collapse of the polariton condensate is counter-intuitive since the polariton interactions are known to be repulsive  and they have a positive mass. This suggests the intervention of an unconventional mechanism. Our modeling proposes a local heating of the crystal lattice as an explanation for such a self-trapping, described by a collective polaron formed by the polariton condensate. The remarkable phenomenology we report shows once more how polaritons can break new grounds in the physics of quantum fluids, with sui generis physics and phenomena. [Full article]