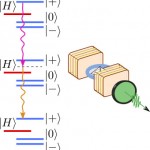 The generation of photon pairs ranks as one of the most useful resources in quantum information and quantum communication, where they can be used to obtain heralded single photons or implement schemes such as entanglement swapping or teleportation. Their applications extend to numerous other fields, from the increase of absorption rates of organic molecules in two-photon microscopy to the study of quantum walks of correlated photons.
Biexcitons in semiconductor quantum dots  (states of two excitons with a binding energy) are one of the best systems in which these photons pairs can be produced, thanks to the two photon cascade that occurs in the deexcitation of the biexciton. In the present work, C. Sánchez Muñoz et al. make an advance in this direction by bringing together the two-photon coherent excitation of the biexciton (currently used to deterministically initialize the biexcitonic state) and the theory of multiphoton emission from a ladder of dressed states, that takes place when the driving is strong enough to alter the level structure of the system. This dressing posed a bound to the generation rate of photons in previous approaches, since it sets a limit for the intensity of the excitation (when too strong, the driving spoils the level structure these approaches rely on). However, the effect is now used to our benefit by bringing the system together with an optical microcavity, which provides a Purcell enhancement of virtual multi-photon transitions between the dressed levels. The physical richness of the biexcitonic system allows to explore a whole set of configurations and regimes of two-photon emission, from antibunched to entangled photon pairs. The success of this proposal demonstrates that the approach can be implemented on a wide variety of systems, benefiting from their particular features and opening new doors in the generation of non-classical states of light. [Full article]