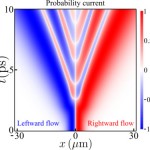 The Schrödinger wave packet is a fundamental concept of quantum mechanics that, historically, gives the probability (amplitude) to find a particle at a particular position (or a particular momentum, one excluding the other). Gaussian wave packets are natural solutions of the Schrödinger equation, and their dynamical properties (diffusion, scattering against a potential, etc…) are well known by graduate physics students. Many  kinds of wave packets and their connections to particles have since been discovered, such as solitons, that can maintain their shape through propagation if interactions between particles are present, or the Airy beams discovered by Berry and Balazs, that accelerate without any external force or interactions.

We add another member to the family of noteworthy non-interacting wave packets. Taking advantages of the nonlinear dispersion relation of polaritons—quasiparticles arising in semiconductor microcavities  from the coupling of a light field (cavity photons) and a matter fields (excitons of a quantum well)—we demonstrate theoretically that a simple Gaussian pulse can give rise to a Self-Interfering Wave Packet (SIP) that exhibits solitonic properties, although non-interacting. This is powered by the polaritonic dispersion that provides diffusive effective masses of different signs within the same wave packet, leading to self-interferences. A rich phenomenology arises from this concept, such as adding Rabi oscillations that order a spacetime crystal, or by detuning the system which produces ultrafast subpackets. [Full article]