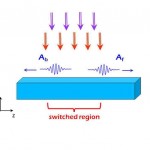 The ultrafast third-order optical nonlinearity of metals was studied in the 1970’s and 1980’s, and is thought to be well-understood. In particular, it was shown that the dominant effect was a thermal response, which was described within a standard perturbative formulation, as a small cubic nonlinearity.