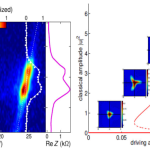 Real quantum systems never live in isolation but are embedded in surrounding media. An impressive example is cavity quantum electrodynamics and its more recent realization circuit-QED, where `artificial atoms’ in microwave cavities are implemented with superconducting circuits. Quantum electrodynamics, however, implies the interaction of bosonic with fermionic matter in general. For the latter, fascinating progress has been achieved in the field of quantum electronics to control charge transfer down to the level of individual charge carriers.

Activities to combine these two previously almost distinct fields, quantum optics and quantum electronics, have appeared only very recently with the advent of Josephson photonics. This opens a new playground to study a wealth of phenomena far from equilibrium including non-classical light sources, ultra-strong charge-light interactions, and quantum phase transitions in steady state. In this talk I will discuss experimental developments in line with the theoretical background.