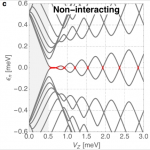 Fig. 1. (a) Proximitised Rashba nanowire of finite length with gate-tunable Fermi energy and under a parallel Zeeman field Vz. (b) Bound charges ρb arise in the dielectric surroundings, which interact with free charges in the nanowire. (c,d) Non-interacting and interacting spectra of the nanowire. Extended zero modes (in red) in (d) are the result of the interaction-induced pinning, discussed in this work, of Majoranas at zero energy around parity crossings.

Since the early experimental efforts towards the generation and characterisation of Majorana zero modes in solid state devices, remarkable progress has been accomplished. Recently, this field has seen a revival thanks to new experiments of exceptional quality on proximitised semiconducting nanowires. These experiments provide cleaner devices, with longer mean free paths and much more robust induced superconductivity. Samples of this quality are expected to develop an unambiguous, topologically nontrivial superconducting phase. If the length of the nanowire is much greater than the Majorana length, the wire should host zero-energy Majorana states at its edges, which would be detected as e.g. zero-bias anomalies in tunnelling transport measurements. However, this is not the case of samples of realistic length (see Fig. 1a,c). In this case, the two Majoranas at opposite ends of the wire overlap substantially, which results in the annihilation of the zero energy modes through hybridization, and their topological protection is destroyed. This theoretical expectation is in stark contrast with some recent experiments reporting surprisingly stable zero-bias anomalies in transport.

A collaboration between IFIMAC and ICMM (CSIC) researches published in npj Quantum Materials has studied the problem of the stability of zero-energy Majorana states in the presence of electronic interactions including, crucially, the interactions with the dielectric environment (see Fig. 1b), which has thus far been neglected in the literature. The authors present a solution to the Majorana stability puzzle by demonstrating that interaction with image charges in the dielectric environment may efficiently stabilise Majoranas back to zero energy and charge (Fig. 1d), drastically changing the non-interacting paradigm (Fig. 1c). This interaction leads to electronically incompressible parameter regions wherein Majoranas remain insensitive to local perturbations, despite their overlap. This effect, here dubbed “zero-energy pinning”, could be of great practical importance since it may allow realistic Majorana devices to recover their topological protection against local fluctuations of the environment. It is only then that their non-Abelian statistics can be exploited for future fault-tolerant quantum computers. [Full article]