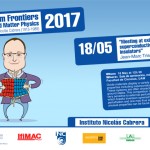 Oxide materials display within the same family of compounds a variety of exciting electronic properties ranging from ferroelectricity to ferromagnetism and superconductivity. These systems are often characterized by strong electronic correlations, complex phase diagrams and competing ground states. This competition makes these materials very sensitive to external parameters such as pressure or magnetic field. An interface, which naturally breaks inversion symmetry, is a major perturbation and one may thus expect that electronic systems with unusual properties can be generated at oxide interfaces [1,2]. A striking example is the interface between LaAlO3 and SrTiO3, two good band insulators, which was found to be conducting [3], and, in some doping range, superconducting with a maximum critical temperature of about 300 mK [4].

In this presentation, I will motivate the search for novel properties at oxide interfaces before to focus on the LaAlO3/SrTiO3 interface. In this system, the thickness of the conducting layer is found to be a few nanometers at low temperatures. This electron liquid with low electronic density, typically 5 1013 electrons/cm2, and naturally sandwiched between two insulators is ideal for performing electric field effect experiments allowing the carrier density to be tuned and superconductivity to be switched on and off. I will discuss the origin of the electron liquid [5]; superconductivity [4,6]; field effect experiments and the phase diagram of the system [6] and the comparison between superconductivity at the interface and in bulk doped SrTiO3 before to give perspectives on the future of this research field [7].