Droplets of Quantum Physics or Why Helium is The Superelement 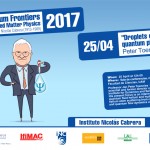 Helium is an element of many superlatives. It is, on the one hand, the smallest and most inert of all atoms and, on the other, the second most abundant element (after hydrogen) in the universe. The bosonic nature, small mass and weak intermolecular forces explain why it is the only substance that remains liquid down to zero Kelvin and the only naturally occurring superfluid.

Superfluidity and frictionless flow of 4He were long thought, after its controversial discovery in 1938, to exist only in the bulk. Then starting about 1990 molecular beams of clusters and droplets revealed the following unexpected microscopic new super properties [1], each of which is the largest in nature: (1) The He-He scattering cross section at T → 0 is 2,590 nm2. (2) The dimer bond distance is <R> = 5.2 nm. (3) The trimer is even larger and extends out to 30 nm!

The properties of larger helium aggregates have been explored via the spectroscopy of interior-embedded weakly-interacting chromophores, e.g. OCS or SF6. Surprisingly In droplets with more than 60 atoms molecules can rotate freely as if in vacuum. This made it possible to determine their temperature which is only 0.37 K (~ 0.1 K in 3He). Several subsequent experiments confirm that the droplets show many of the hallmarks of bulk superfluidity. These experiments have established that 4He droplets are superfluid making them the coldest and gentlest of all matrices for spectroscopic studies.

The many high resolution spectroscopic studies of small molecules have provided many new unexpected manifestations of microscopic superfluidty. He droplets have also opened up the spectroscopy of large biomolecules and countless taylor-made heterogeneous clusters. Other novel applications [2] are: (1) Assembly of pure and alloy metal nanowires on quantum vortices in the interior of very large droplets. (2) Facile laser- and field-alignment of the very cold molecules. (3) Catalysis and enhancement of the rates of chemical reactions, (4) Structural studies of large biomolecules using electron diffraction and (5) X-ray diffraction studies of exotic vortex-induced microscopic Abrikosov lattices, to name only a few.

Thus I hope that you will understand why I have been fascinated with helium and why I think it certainly deserves the honor of being named the “Superelement of the universe”.