Majorana Braiding in Superconductors: How to Operate on a Zen Particle 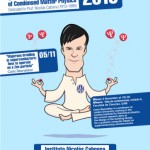 Among the many exotic properties of topological superconductors, the prediction that they can host Majoranas stands out both for its  fundamental interest and for possible applications in topological  quantum computing. To exchange (braid) pairs of Majoranas is the  heroic experiment, since it would identify them as a fundamentally new  type of quasiparticles with non-Abelian statistics. The road towards  this goal has several milestones, starting from the detection of the  zero-mode itself, on which the present generation of experiments is  focused. In this talk we look ahead towards the next milestones: the construction of a qubit out of Majoranas, the measurement of its coherence times, and finally the braiding experiment to demonstrate its non-Abelian nature.The key problem that we address is how to operate on a cipher with zero charge, zero spin, zero energy, and zero mass — a “Zen particle”.