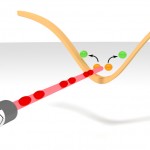 For about five decades, research in quantum optics has been focused on photon correlations of systems excited by a laser. In this Letter, we propose a change in this paradigm, namely, we replace the laser with the emission of a quantum system. This emission has special features that a laser doesn’t have, e.g., it is highly correlated. Turning to quantum light thus allows us to explore new regimes of excitation. As an illustration of this approach, we consider the quantum light emitted by a two-level system, impinging on a passive cavity or one embedding quantum wells. The later case gives rise to so-called polaritons, particles of light and matter, with wondrous properties including high temperature BEC, superfluidity and a full gamut of nonlinear optical effects. Specifically, we show how quantum light, thanks to its reduced fluctuation and statistical properties, allows us to measure exactly the polariton interaction, even when it is weak as compared to dissipation. This technique that we refer to as “Mollow spectroscopy”, after the Mollow lineshape of resonance fluorescence used as the quantum source, should be of general interest for a wide range of optical targets and open new grounds in the nascent field of quantum spectroscopy. [Full article]